If you use a bag twice, once bringing home groceries and again picking up after your dog or as a waste basket liner, isn’t the bag reusable?

Not under a bag ban.  Bag bans usually define reusable bags those designed for at least 125 uses.

This list is a little selective: it doesn’t cover every kind of bag, but it does cover the most common types of bags used for carry out.  This list does not list all the pros and cons of these products, but it does address the major environmental impacts of these bags and whether the specifications meet the requirements of a bag ban or not.

None of these bags types are named in any bag bans, but if you go to purchase bags, at retail or wholesale, these are the types of bags you will find.  The characteristics of each bag type below are fairly standardized, so the name of the bag becomes a sort of short-hand for buyers and sellers, indicating technical features that that add up to a bag that is either banned or allowed under bag bans.

The T-Shirt Bag (AKA the Thank You Bag)

This bag is the main target of most bag legislation and regulation.  It is made from HDPE (High Density Polyethylene) and is commonly cited as the most ubiquitous item in the world with estimates ranging up to a 5 trillion used a year, or 160,000 bags a second.  It is ultra-light weight and ultra-cheap, a combination that once led to its rise as the most dominant bag anywhere, and is now the reason for its downfall.

Because it is cheap, stores give this bag away for free, and in response, people see it as worthless.  Because it is super light, it is likely to blow far from wherever it is dropped.  Even if it is dropped in a proper receptacle, millions end up blowing out of garbage bins, trash trucks or even landfill.  Images of them swirling around our streets, hanging lifelessly from trees, and choking turtles and other marine life in our oceans, are familiar to most of us.

There were so many of them littering the landscape of Ireland before their ban in 2002 that it was jokingly nicknamed “the national flower.”  The blight of these bags in Ireland was the impetus for the first bag ban in the world, and other areas have followed.

The damage to marine life and the environment in general caused by this bag has been well documented. Yet 22% of American consumers still name it their bag of choice.  While the rest of the population prefers a reusable or paper bag, these hold outs are the ones who will have to make the biggest change under a bag ban.

Good old paper bags are still ok under most bag bans, but they have to meet some requirements to be legal.

First and foremost, under California regulations, these bags must contain a minimum of 40% post-consumer recycled waste, and feature the word RECYCLABLE prominently.  Retailers can no longer give these, or any other bags, away for free under most bag bans.  The minimum charge for a paper bag is the same as a plastic bag:  ten cents in most California bans, five cents in New York City, Washington DC, and many other east coast bans.

We often think of paper bags as a better alternative for the environment, and no doubt, there are some benefits.  They are biodegradable and don’t threaten marine animals if they end up in our oceans.

Still, for the environment, paper bags are as questionable as plastic when you look at the bigger picture.  Take a look at paper bag manufacturing, usage, and even disposal problems, and you will see why they are not a better choice.

Although paper bags are biodegradable, about 80% percent of them end up in landfills. There, they do not biodegrade because of a lack of oxygen.  Bag for bag, they cost more to landfill than plastic bags because they take up much more space by weight and volume.  About 10% of people prefer them to plastic or reusable bags, and most grocery stores still offer them.

LDPE (Low Density Polyethylene) bags, a stronger cousin to HDPE T-Shirt bags, are just barely legal under the California and most other bans, meeting the bare minimum standard to ten thousandth of an inch.  These bags can be sold for a profit at the minimum price, which is ten cents each in CA.

When bans on plastic T-shirt bags put an estimated $4 billion a year industry at stake, makers of plastic film bags needed a product sturdy enough to be classified as reusable.  Many retailers like booksellers and boutiques had long demanded a plastic bag that was stronger and more upscale than the T-Shirt bag.  Made of LDPE Wave-Top or Soft Loop Handle bag was just the thing.  So this upscale plastic bag was recruited from the boutique retail industry and re-purposed for grocery carry out.

LDPE bags are available in a range of thicknesses from 1-4 mil.  Those marketed for grocery reuse are at least 2.25 mils thick, or as some plastic film bag manufacturers like to point out, the cheapest legal bag in areas under a bag ban.  At 2.25 mils, one reusable LDPE bag is equivalent to about four T-shirt bags.  According to manufacturers, it can be wiped clean or washed under warm soapy water and hung upside down to dry.

This bag can be used up to 125 times with a 22 pound load carried over 175 feet.  Whether consumers will use them to that extent remains to be seen.  With reports of very low actual reuses of LDPE bags by consumers, some cities are considering revising their bag bans to declassify LDPE bags as reusable.   One recent study found that on average, LDPE bags are reused 3.1 times.  In another study, volunteers polled 740 grocery shoppers in Monterey, CA and found only four who had reused a plastic film bag of 2.25 mil.

The low reuse rate of these bags speaks to the cool reception of them by consumers.  One study has shown that just 6% of consumers say they prefer LDPE bags.  Under most bag bans, the minimum charge is between five and ten cents per bag, and many consumers just don’t see them as a good investment.  In a side by side comparison, an NWPP bags holds as much as two LDPE bags and is usually reused many more times.   Ten times as many people (61%) say they prefer the more expensive NWPP bag.

This is the bag first developed by Ireland in response to the bag ban.  In order to get rid of the T-Shirt bag, they needed a better bag to replace it.  They needed a bag that was durable, easy to use and clean, attractive, and inexpensive.

NWPP was commonly used in medical settings for disposable gowns and caps, as the fabric under couches or other furniture, and in many other uses.  The NWPP bag was a new creation in 2002. With a bottom stiffener for added durability and stability, it quickly became popular with consumers.

For 99 cents, most shoppers saw these reusable grocery bags as a very affordable upgrade.  Stronger, bigger, and easier to carry than T-Shirt bags, it was an instant hit everywhere it was introduced in the early 2000s.  It is now by far the preferred bag by consumers, chosen by 66% of those surveyed as their bag of choice.

For a grocery or pharmacy, as well as many other retail stores, a carry out bag with a logo is a key element of branding and identity.  Many retailers have multi-color logos and want a full color bag with their name in its full glory.  Some retailers, like Trade Joe’s, quickly realized that fun graphics significantly boosted the appeal of a bag among their consumers and went a long way toward helping consumers feel good about shelling out a buck for a bag.

By adding a thin film of lamination over polypropylene fabric, stores can get the bag of their dreams.  The lamination is first imprinted with 4 color process printing, then pressed through hot rollers onto woven or non-woven polypropylene fabric.  The resulting fabric can be sewn into a bag that, for about 20% to 30% more in price, far out-performs the NWPP bag in strength, durability, and marketing possibilities. 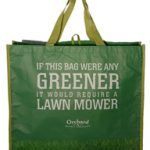 Post-consumer waste recycled products are the gold standard for environmental friendliness.  Take something that would have gone into landfill, and re-process it into something useful you can use again and again.

Recycled PET bags do just that. Recycled water bottles are shredded, then spun and pressed into a fabric that can be laminated with 4 color graphics.  For a little higher price, it’s a lot cleaner and greener.

Yep, you can still grab a box that was used to deliver food to the store and carry out that way.  Some stores offer them free of charge.  Actually, this is the cheapest option for both retailers and consumers.  Some stores, like Costco, offer it as your only option if you don’t have your own.

It’s a good environmental option too, reusing an item that was bound for trash one more time before disposing of it.  No new emissions or trash is made when a grocery box is reused.

« California Bag Ban Overview: Who, What, When, and Where
Reusable Bag Standards »

I’ve Been Using Them for 12 Years!

I see your best seller guarantees 2 years of regular use – OMG – I’VE BEEN USING THEM FOR 12 YEARS!  And still using them.  I’ve used them weekly to go grocery store and washed them quarterly since I purchased them in 2004!!  I haven’t purchased another bag since I bought yours.

I still use it to this day

I bought my first 1Bagatatime bag in 2005 from a local produce stand, Kordell's in Lake Oswego, OR. I still use it to this day in 2015 on a weekly basis. I thought it was a great idea then, and look, now every store asks "Do you have your reusable bags with you?"

The bags are exactly what we wanted

Every Earth Week, we give away 20,000 free custom reusable bags. 1 Bag at a Time is attentive and responsive and offers us great customer service! The bags are exactly what we wanted (and come in right on budget) and our customers look forward to them every year.

The quality of the bags is so good

The Mountain Lodge Telluride has been purchasing top quality bags from 1 Bag At a Time for the past 5 or 6 years. We use the bags as a marketing tool for our Lodge and give them away in each room upon arrival so our guests can use the bags for local shopping and therefore cut down on plastic bags contaminating our planet. The quality of the bags is so good people take them home and re-use them. We have images of our property along with our name and website. I have seen our bags in Australia, Europe, South America and all over the United States. They are very popular and the marketing value is unbeatable.

We’ve been a customer of 1 Bag at a Time for approximately 10 years and have always received excellent service, competitive pricing, and a top-notch product. Lisa is very responsive and great to work with

We love our 1 Bag at a Time

We (here at LifeSource Natural Foods) love our 1 Bag at a Time reuseable grocery bags. Because we change our color combination and/or design with each order, our customers collect them and use them whenever they shop elsewhere. And, the customer service is great, too!

Excellent customer service – with 1 Bag at a Time

At Harvest Co-op Market, we have been repeat customers for 10 years. We not only wanted a good quality, long lasting bag for environmental reasons, but we also wanted to be sure that workers were treated responsibly. We found both - along with excellent customer service - with 1 Bag at a Time